This past weekend, my husband Ryan and I decided since we had a weekend free it would be the perfect time to finally visit Canada. We tried to pick a time of year that was warm and boy did we pick it! Low 90s, sunny and it happened to Canada Day so it was a very festive weekend. This time around, we decided on visiting Toronto, and it was a great experience! Everyone was very friendly, the food was great, and we had an easy time navigating the city with all their transportation options. 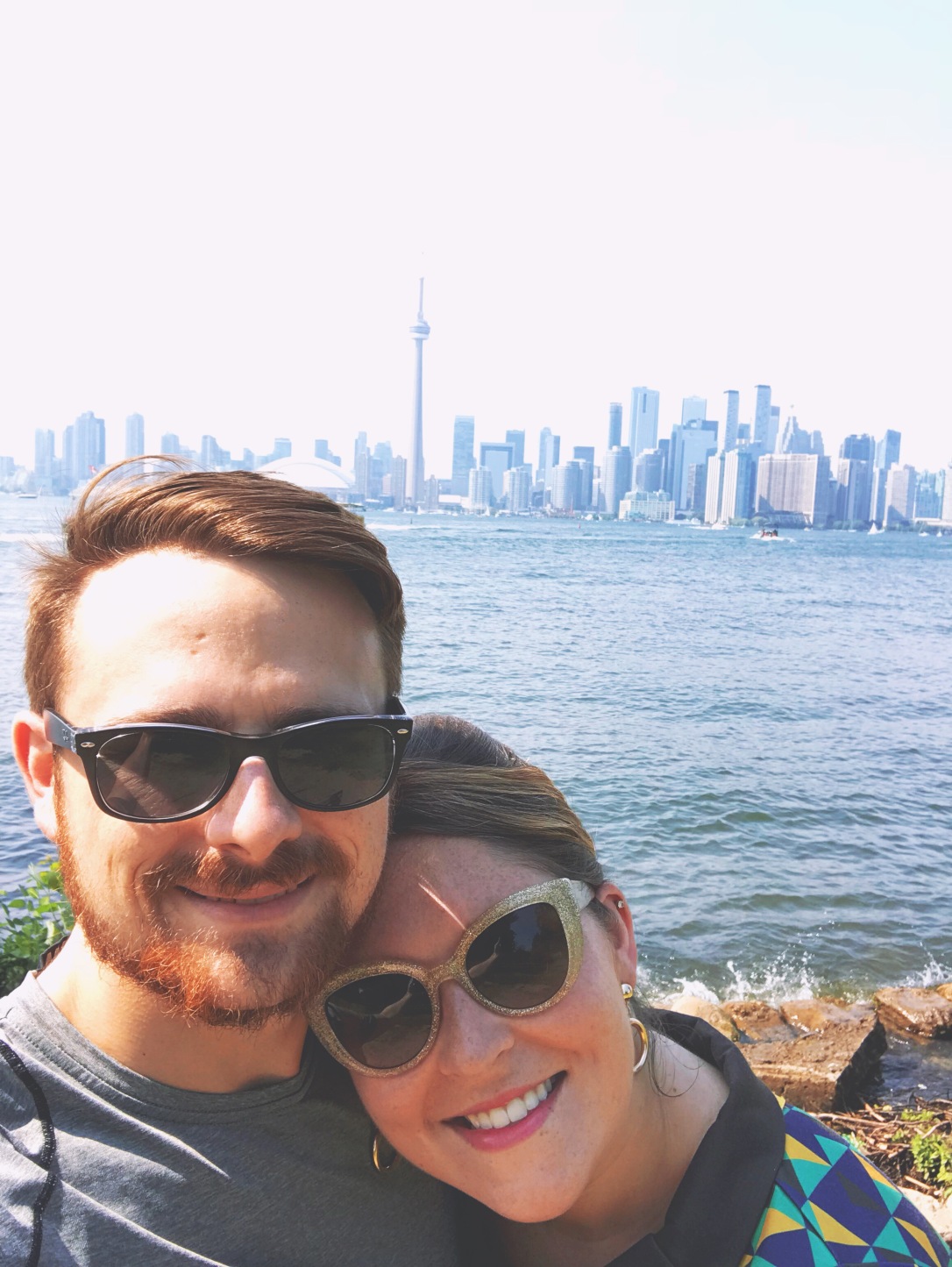 We didn’t jam pack our weekend with lots of activities, since we’ve been leading a very hectic life lately and wanted to relax. We did a couple things a day, took some nap breaks at the airbnb, and just really took our time. I can’t give recommendations on the usual attractions of a big city like this (museums, observation towers, etc), but I can give you feedback on what we did do. 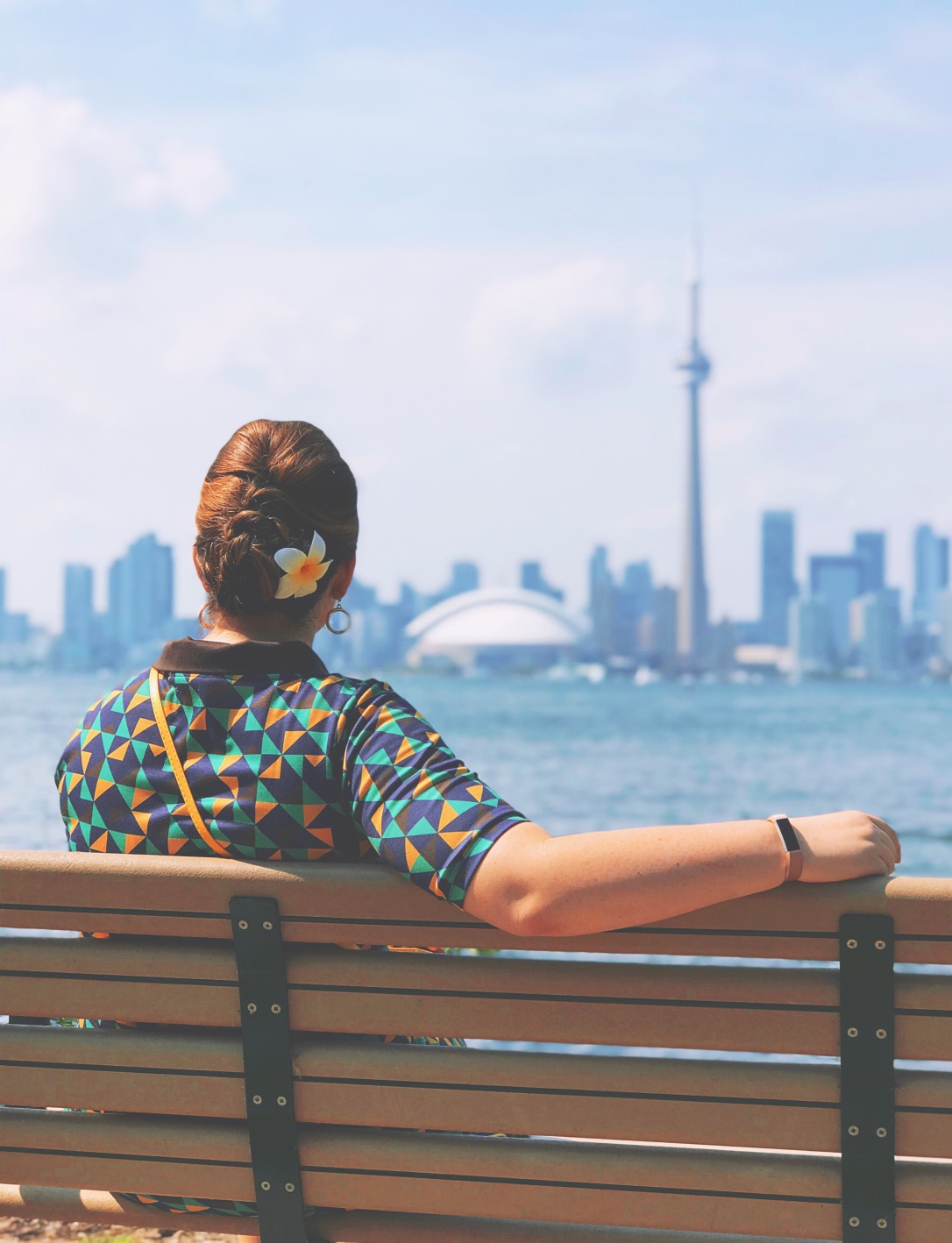 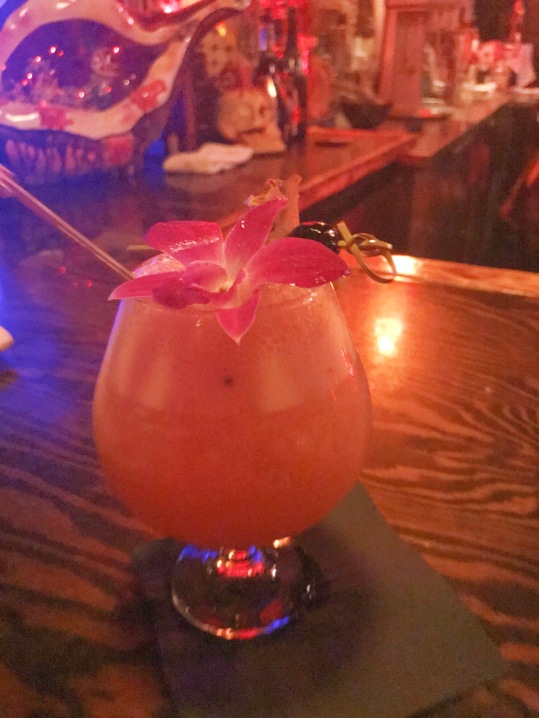 When we had lunch at this joint, it was pretty much dead, but I think it’s mostly because during the day they get mostly take out orders. The atmosphere was nothing to sneeze at, but the BBQ was spot on! Ryan had the rib sandwich while I tried the sweet BBQ tacos. The food came quick, fresh, and very flavorful.

This Thai place had a cool contemporary decor that super popular in the states as well; rustic, industrial chic with some small Asian touches. It was a popular dinner spot, but we didn’t have trouble getting a table. Ryan has his usual Thai chicken fried rice while I tried pad Thai for the first time. I couldn’t finish my huge portion, but I really enjoyed it’s nutty flavor.

This tiki bar has been one of my favorites I ventured to so far! The decor was spot on, the music had ultra surf vibes (a la Quentin Tarantino) and the drinks were superb. A group of friends near us kept ordering the mystery ______, which includes theatrical smoke and fire from the shelled basin, a bang on the kong, and the bartenders shouting along with the patrons “The mysteryyyyyyy bowl.” While Ryan had his usual Blue Hawaiian, I tried the Rum Barrel, and I’ve never had a hard time slurping up my drink before Ryan finished his until now. I don’t know if it was because we didn’t have straws with our drink or the portion size was larger than my usual, but I definitely got more bang for my buck and I think I found a new favorite to recreate at home!

Ryan was super excited to try this place when he found out there was an all cider brewery in Toronto. It had a great atmosphere with its exposed vats of cider and urban decor, excellent waitstaff and the drinks/food were phenomenal. The only reason I give it 4 stars instead of 5 is because it wasn’t air conditioned, and the large windows made it very hot and sweaty. The waiters gave us fans to borrow, which was sweet of them, but I was definitely feeling the heat of summer in there. We both tried two ciders each, the ______ (sweet), ______ (sweet), _______(semi dry), and ________ (semi dry), all which we enjoyed. Ryan had a succulent pork chop while I had one of the best black bean burgers with guacamole.

This chic brunch place is in the middle of downtown, so it was very busy. The wait for our table wasn’t terribly long, but the wait for our food was. I occupied my time with people watching from our patio seating, one of my favorite activities. I wasn’t wowed by my omelet and home fries, but it filled me up. Ryan enjoyed his classic scramble and bacon more.

(Not even going to actually give you the name, because I wouldn’t recommend it)  We had planned on another brunch place for Sunday, but didn’t realize some restaurants were closed for Canada day, which included our chosen restaurant. Instead, we ventured across the street to a pub. It was a plain, local joint that was playing the soccer game with locals huddled around with beer. The atmosphere and food was subpar (dripping air conditioner above us wasn’t so great), but it was peaceful and fairly inexpensive. 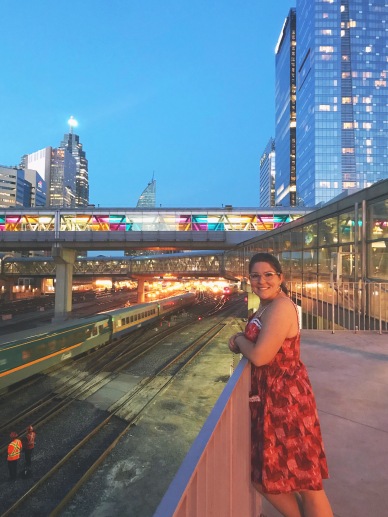 Blue Jays Game at the Rogers Centre
We chose a night game so it wasn’t so hot, and the large retractable ceiling helped keep it cool as well. The view of the city from the stadium was great and the game was lively. We grabbed hot dogs and soda at the concessions for dinner, and we got a great deal on our tickets. All in all, a great night for a game.

Centre Island
This was the highlight of our trip and I highly recommend going! For a cheap ferry ticket, you can choose from 3 different spots on the island (we chose Centre where the most is going on), and a short trip over transports you to a lush landscape with spectacular views of the Toronto skyline. The island has winding paths for walking or cycling (bicycle rentals are available), docks for private boats, paddle boats in the shape of swans, lounge chairs overlooking the water/skyline, multiple playgrounds, a beach for swimming and lounging on Lake Ontario, several pools and much more! We weren’t prepared with swimsuits, so we meandered around the paths, lounged at the chairs, and walked along the beach to dip our toes in the cool water.

Kensington Market
When we first entered the area, it looked more like a dilapidated flea market with junky trinkets. As you get further in though, it’s chock full of interesting murals, colorful vintage shops and quirky restaurants. It’s gritty but colorful, and we found a few great vintage pieces at various stores. We stopped for dessert at GRK YGRT, a delicious Greek frozen yogurt shop with lots of yummy toppings.

Cabbagetown
If you’re a historic architecture enthusiast like me, this is a nice neighborhood to walk around for pretty victorians.

The Distillery District Once a cluster of distilleries, these historic beauties were renovated into condos, shops and restaurants. The character of the buildings has remained, with its red brick facades, large curved windows and industrial flare. I recommend going in the afternoon, since many of the shops close by the evening. We stopped in a few shops that were open, like the vintage sports memorabilia store, took in the the yummy smells from the taqueria, and stopped for homemade gelato. 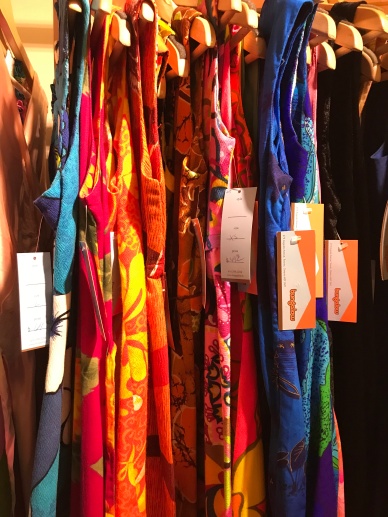 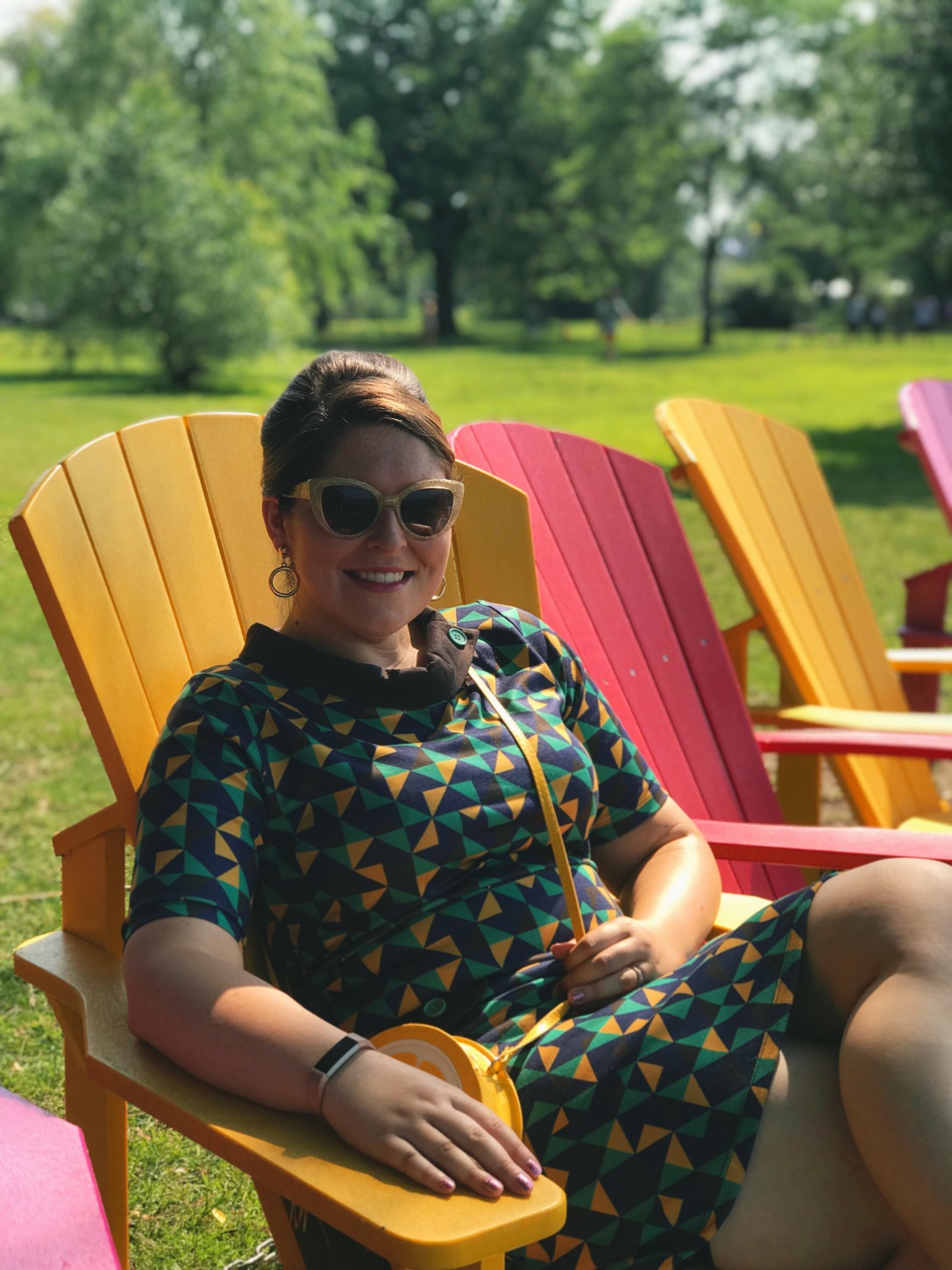 HOW WE GOT AROUND
It was very easy to navigate this big city with its multitude of public transportation options. Pick up a day pass at one of the subway stations and you can use it for any of the subways, buses or tram lines. During the week a day pass is sold per person, but the weekends it’s a two for one deal, which is an awesome price. Don’t be afraid to ask the transport drivers how to get around, they are SUPER friendly.

I hope this helps anyone thinking of heading to Toronto, it’s definitely worth a visit! 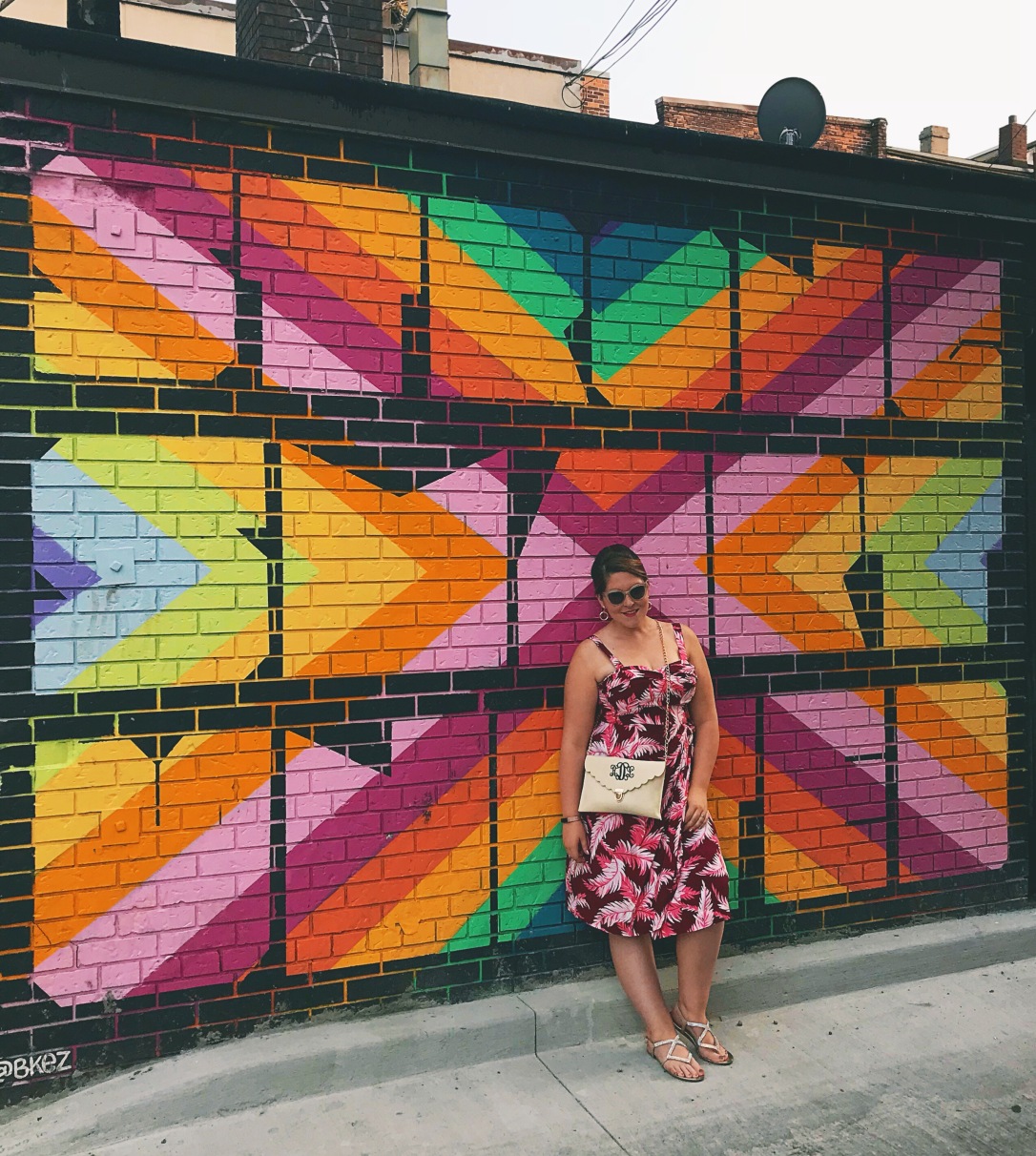 Going to start calling the living room The Rainbow Room. Why only use a few colors when you can use them all 🌈✨
It’s been awhile since we tried a new recipe, and this one was discovered in a fun way! My dad gifted us this vintage file box of recipes from 1977, “The 2 in 1 International Recipe Card Collection for Mixed Drinks and Hors-D’Oeuvre.” Full of quirky party recipes from decades past, I was particularly interested in the rum drinks (obviously)🍹 The first drink we tried was the 𝔾𝕒𝕦𝕘𝕦𝕚𝕟, which is very citrus forward. So citrusy in fact, that I altered the recipe. I added almost triple the amount of passion fruit purée to add more sweetness, and it made it much tastier!
I’ve been in a conundrum for awhile with the lighting at my vanity. I love that it’s an original built-in feature of our 50s house, but the single overhead light succccccks. I wanted sconces but having them hardwired would be super difficult with the closets on each side. And plug in ones would be almost as hard, since I didn’t have a good way of running the cords.
A perfect day at Bernheim Forest with the family. Happy Mother’s Day to our two wonderful mothers, we love you so much!
First craft show of the year for @rdceramics 🎉 The Spring Pottery Fair is always a good one for Ryan, so looking forward to starting the year off selling with a bang! Here at 1523 Madison Rd, Cincinnati until 4pm today. Stop by and get some awesome pottery from one of the many amazing ceramic artists here!
Thank you to everyone who was able to make our housewarming party yesterday! We loved showing off the new home, even if it’s still a major work in progress. Sorry to those we forgot to get a photo with, time flies when you are having fun!
One of the cool original features of this house is the built-in vanity in the main bedroom. I’ve always gotten ready at some vanity or desk throughout the years, so it was great to have such a large one already in our room! I wish I knew what it looked like before the travesty of this all this beige overtook 😵‍💫
Peep that little floating table 👀 We had this half circle floating shelf custom made by @tanerzeeee for our tiki bar at the old house, and it was definitely coming with us when we moved. Now, it makes a great retro looking side table that visually doesn’t take up a lot of space, but still looks cool 👌🏻
One more step towards a more “modern” mid century modern home 🎨 The dark red felt way too traditional for our tastes, and if you’ve seen any of our previous home, you know I’m obsessed with @sherwinwilliams “Amalfi” blue. So it was great to finally add Amalfi to a spot here at the new place 😀 I haven’t found a dedicated plant/planter for the porch yet, but I’m really digging the retro vibes my snake plant pot is giving, so hopefully I can find something similar.
Smart, good looking and funny…
Happy Easter! 🌸
Quick and easy little project for the tropical glam den we have in the basement. The little fit stool for the rattan chair needed a new cover, but my “quick fix” cover was several inches too short…so I found this glitzy trim and hot glued it on!