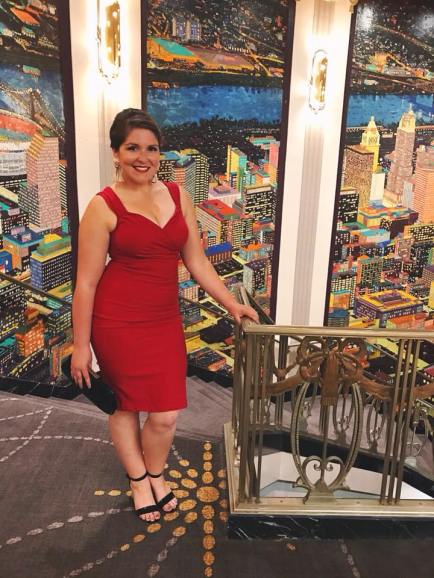 A couple weekends ago, I had the pleasure of spending date night at The Orchid in Palm Court, the swanky bar and restaurant at the Hilton Netherlands Plaza in Cincinnati.  This hotel is beautifully preserved in its Art Deco splendor, with gilded decor, elaborate chandeliers and fresco ceilings.
Being a history and architecture enthusiast, I really enjoy visiting historic places while I travel, but I forget how many old gems are right in my city.  I decided to write this post on interesting historic places in Cincinnati, perfect for a date night or friend outing.
The Orchid in the Hilton Netherland Plaza
As previously mentioned, this Art Deco downtown hotel is a great date night spot.  Built in 1931, it’s retained its historic splendor, and has a beautiful restaurant and bar to eat at with live jazz.  I recommend happy hour for drinks and brunch for food, since The Orchid can be quite pricey. 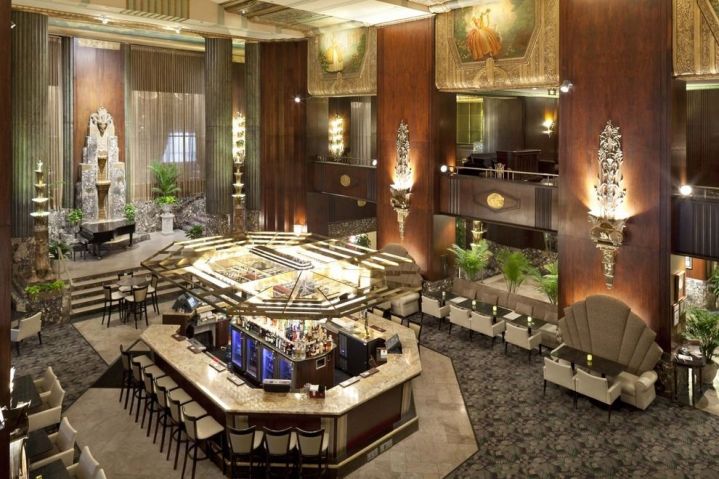 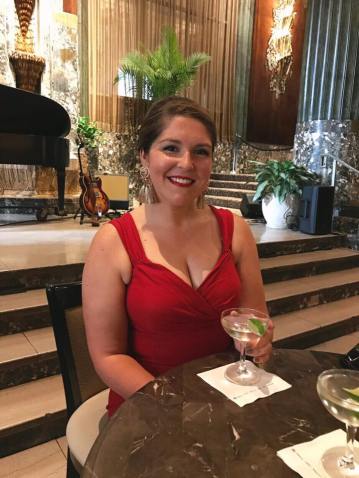 Cincinnati Dinner Train
These vintage dining cars transport you back in time, when train travel was at its glamorous peak.  Your ticket includes a four-course meal, access to the cash bar, live music from the Queen City Sisters, and optimal views as it travels through Cincinnati for your 3 hour ride. 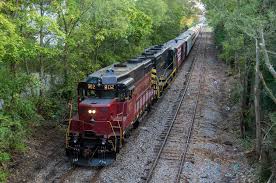 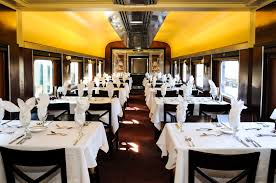 Hathaway’s Diner
Open since 1956, this retro diner is located in the Carew Tower Arcade and serves up classic American food for breakfast and lunch. It’s checkered tile floor, aqua blue vinyl seating and Formica tables give you an authentic mid-century atmosphere, while slurping down one of their hand-dipped milkshakes.  Legitimate diners are a rarity these days, and I’m always on the lookout for them around the country, so it’s nice to have one in my home city. 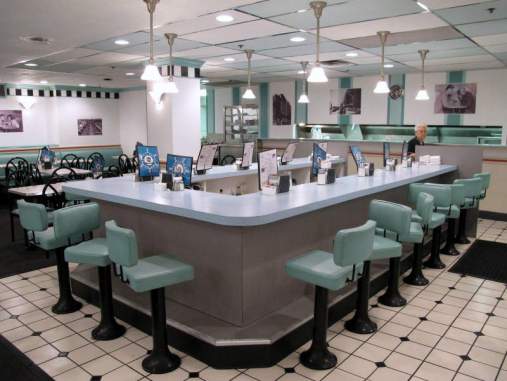 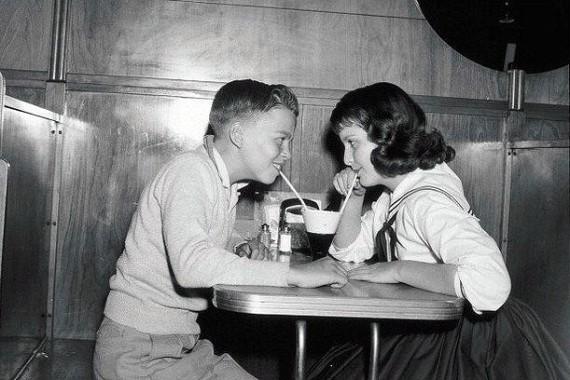 Aglamesis Brothers
Thomas and Nicholas Aglamesis, originally from Greece, laid down roots in Cincinnati in the late 1800s.  Working downtown in the “Old Arcade,” they learned the trade of ice cream, and then used those skills to open their own business.  Originally called the Metropolitan, their hand-churned ice cream and candy was delivered to fashionable homes in Norwood by horse and buggy.  By 1913, the brothers opened a second location in Oakley, which still exists today.  This location survived the Depression and sugar rations of WWII, and was renamed Aglamesis Brothers.  It is one of the last original ice cream parlors from the era of soda fountains and fanciful decor, and it looks every bit as glamorous as it did back then with its marble countertops and pink Tiffany lamps. 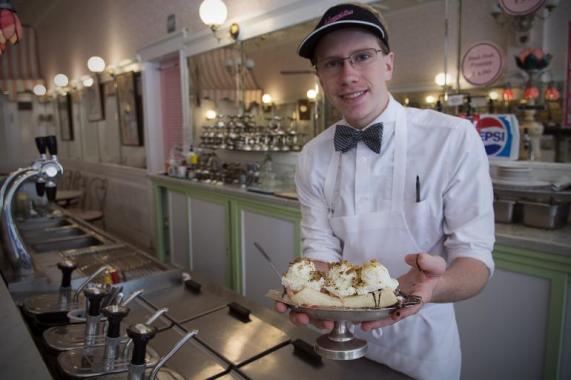 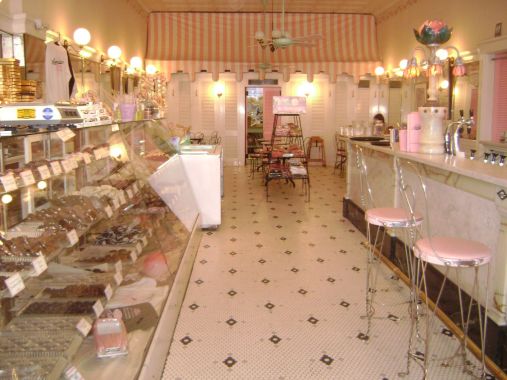 Esquire Theatre
The Esquire Theater, blazing with neon and bright colored tiles, is as beautiful as its 1911 opening, thanks to the Clifton community and their hard work in restoring it.  It’s original purpose of silent films and live events gave way to “talkies,” but it struggled to stay afloat when home videos and megaplex cinemas came onto the scene.  The Clifton neighborhood banded together to stop it from becoming a Wendy’s, and it now thrives as local theater which focuses on independent, low-budget, and foreign films.  Independent theaters from the era of elaborate movie palaces are extremely rare in the United States now, so its upkeep and original character is a cherished part of Cincinnati. 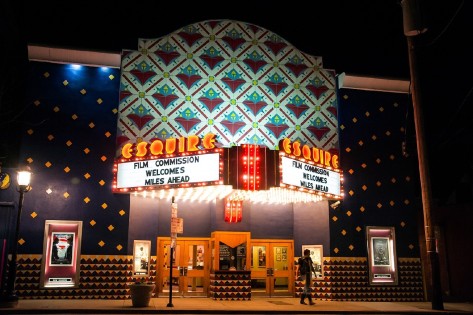 Cincinnati Museum Center
Once a bustling train station, Union Terminal now houses the Cincinnati Science & History Museum, the children’s museum, and an ONIMAX Theater.  It originally opened in 1933, and is a great example of Art Deco style.  It’s large half-dome is covered in glittering mosaic, and if you and a friend stand at opposite corners of the lobby, the acoustics of said dome will carry your whispers across to each other.  I personally love visiting for its magnificent architecture and it’s history as a train (it currently only has one train to Chicago), but it’s museums are also topnotch.  Don’t forget to stop in to its ice cream parlor, which is covered in beautiful Rookwood tiles. 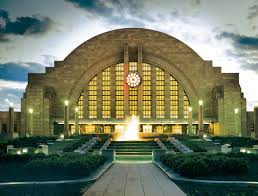 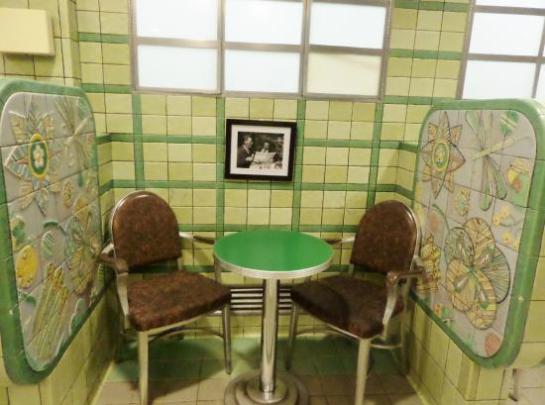 Cincinnati Art Museum (Art After Dark)
The Cincinnati Art Museum is an eclectic mix of architectural styles because of its additions over the years, but it retains its regal 1886 stone entrance and grand lobby.  A walk round an art museum is a pretty standard (and stale) date idea, so I suggest enjoying the museum’s Art After Dark events.  These summer events feature live music, local food and specialty cocktails in the courtyard, and the current exhibits are viewable after-hours. 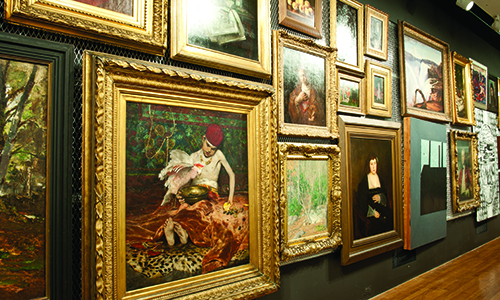 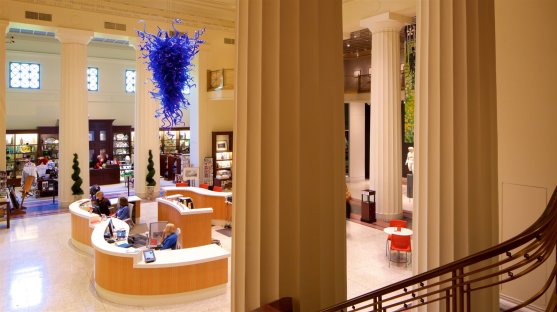 Cincinnati Music Hall
This magnificent Victorian music hall was built in 1878 and is the among Cincinnati’s most recognizable buildings, notable for its rose window and gothic details.  It’s recent renovation has made it even more resplendent, with its glittering chandeliers, champagne-gold moulding, and marble floors.  The music hall is home to the Cincinnati Opera, Symphony Orchestra and Cincinnati Ballet.  It holds many fantastic events and concerts, and I’ve enjoyed going several times.  I particularly enjoy the yearly winter event by the Cincinnati Pops, which features a film (Back To a the Future, and Harry Potter are two that I’ve seen) with the orchestra playing the musical score. 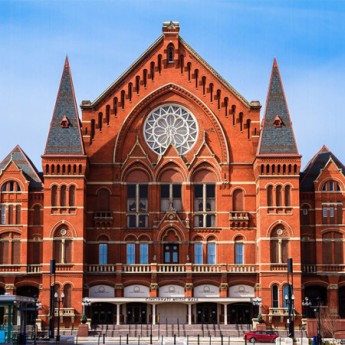 Taft Theatre
This Neo-Classical/Art Deco Theater, built in 1928, is in the heart of downtown and features a plethora of live entertainment.  It also had a major renovation in the last few years, to update some modern comforts while retaining its historic beauty.  The Taft Theater is an excellent venue to see comedians, musicians and story-tellers, like the Moth event I went to there. 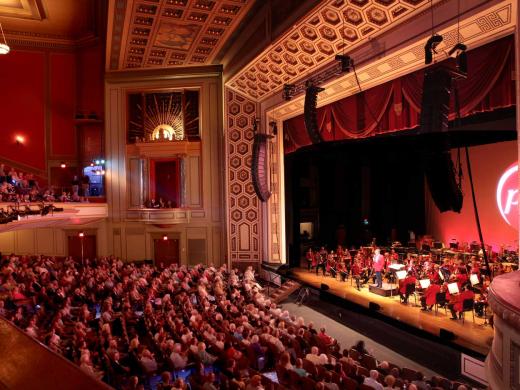 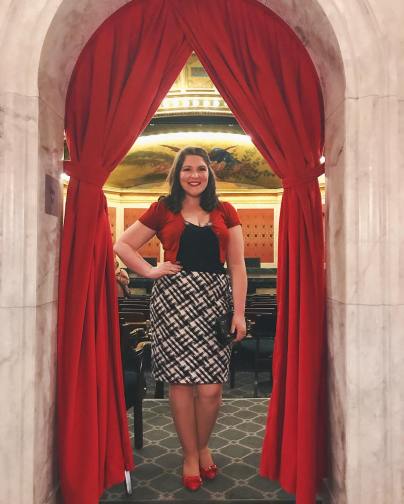 Arnold’s Bar and Grill
This Cincinnati staple, opened in 1861 by Simon Arnold, is comprised of two buildings joined together (once a barbershop and feed store) and is considered the oldest bar in Cincinnati.  Once prohibition hit, the tavern was converted into a cafe with restaurant seating on the second floor, and the third floor houses the second generation owner, Hugo Arnold.  Legend has it that Hugo kept the claw foot bathtub on the second floor for bathtub gin.
Arnold’s Bar and Grill was operated for 98 years, by three generations of Arnolds, but has since been owned by families outside the Arnolds.  Arnold’s continues to serve great food, including my favorite chicken and waffles (waffles by Marty’s Waffles) and has live music on its stage in the outdoor dining area. 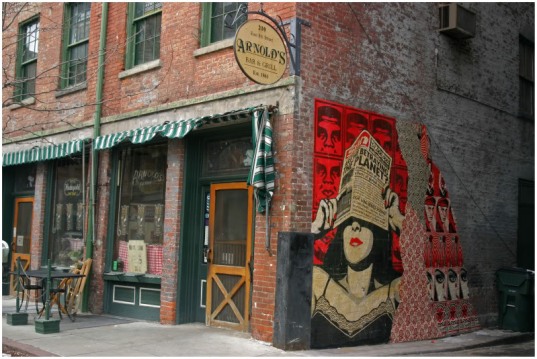 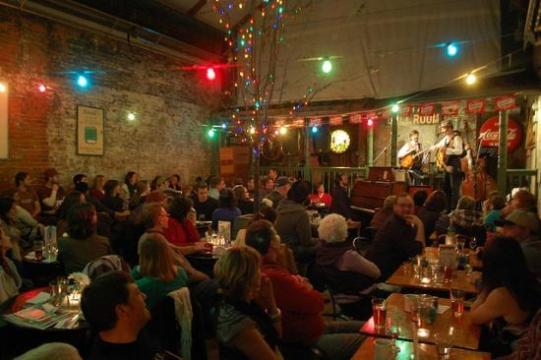 Mecklenburg Gardens
This German gem has been around since 1865, and is an important part of Cincinnati’s German heritage.  In the late 1800s and early 1900s, the restaurant was a meeting place for many German residents to learn the American lifestyle, and continues to host German heritage groups. It’s a great place to have a lager and authentic German food. 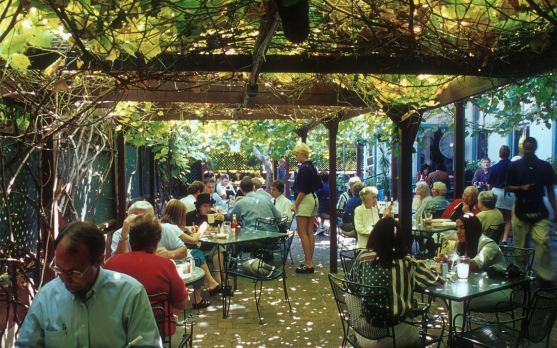 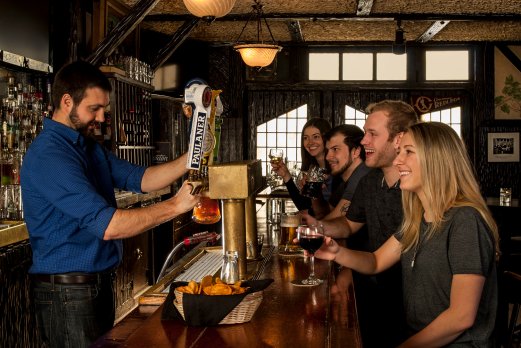 Scotti’s Italian Restaurant
Scotti’s isn’t the place for authentic Italian, it’s where you go for Italian-American comfort food and a kitschy atmosphere.  Owned by the same family since 1912, with its current location on Vine St since the 1940s, this restaurant is full of quirkiness…wine bottles dripping with layers of wax, mosaic tiled walls me opera. Us if playing in the background.  Red sauce and cheese galore, it’s menu makes me want to eat ALL the food and relive my childhood pasta days (that’s pretty much all I ate). 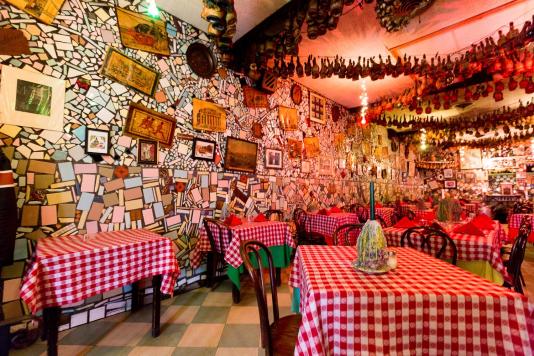 Picnic at Eden Park
Eden Park, home to the Cincinnati Art Museum and Krohn Conservatory, is beautiful in its own right.  The park was named after the Garden of Eden in the mid-1800s, and was originally comprised of 186 acres.  Throughout the years various structures and gardens were built like the previously mentioned Museum and conservatory, along with an ornate gazebo, Mirror Lake, the Water Tower, and the Bettman Fountain.  There is also a very pretty area, perfect for a picnic, called Twin Lakes.  This area includes two lakes, a footbridge, walking paths and a great view of the Ohio River.  Grab a blanket, your cooler (or your retro picnic basket like me), and enjoy the great views here. 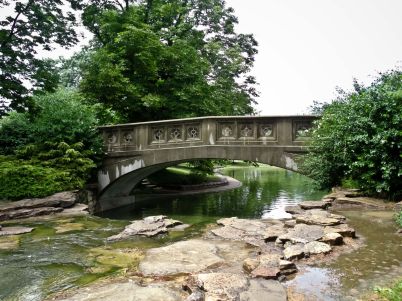 So I found several funky patterned vinyl sheets at @hobbylobby awhile back and hadn’t figured out what to do with them…until now😀 It was super easy to apply the vinyl after taking off the handle, and it only took a few minutes to liven up this thrifted nightstand.
Our bedroom is slowly coming along, and it seems Autumn approves 😻 After debating what layout was best for our furniture, we decided that the bed needed to be on this wall…however, there is a single window behind our very large headboard, and it looked really awkward. My solution was buying two $5 curtain rods, cutting up/sewing my existing curtains, and making this canopy to cover up the window. Probably the cheapest project I’ve done so far for the new house 😀
This kitchen nook was cramped with projects we hadn’t gotten around to yet…but this weekend we took care of that problem, and it’s looking great! 🙌🏻 We got the mug shelf up and the Sputnik light installed (used to be a brown fan up there) which brings in way more light for the kitchen 💡
Merry Christmas! 🎄
Annual Durbin Christmas Party 🎄
It’s been awhile since my last #tikituesday 🍹 Not that we haven’t had plenty of tiki drinks since my last post, it’s just been awhile since a new recipe 😝 This seasonal drink is a recipe of my own creation, inspired by the @findfoxtails simple syrup I bought at an art show! The simple syrup, infused with cherries, vanilla, oranges, and spices, is actually crafted to use with Old Fashioneds 🍒🍊 But I knew it would go great in a rum drink too! Enough talk though, let’s get to the drink!
An evening full of Monk binge watching later, and this chair is all gussied up! 📺Ryan found this vintage rocking chair for $5 at a yard sale recently, and it’s pretty darn comfy. It definitely needed a prettier fabric though! I wanted something fun that matched the tones of the other chair, and this @joann_stores painterly fabric fit the bill 🎨
The round gallery is up! I’ve been mulling over what to put on the walls in the living room. I’m trying to lean more into the mid century roots of the home, while also embracing my love of bohemian decor. Luckily those two styles go together very well!
Decided to throw up some faux plants in this corner 🌿 I have a DIY lantern project in the works for this corner too, just waiting on my lighting kit 😀
Happy Thanksgiving! 🌽🥧🦃
What do you call limes that open doors?…Key Limes! 💚💛
I think this might be the extent of my Christmas decor this year 🎄 Since we still have to take care of two houses for the next few weeks, and we are still unpacking and moving furniture…I think this is all I can handle 😵‍💫 Found the cute little Christmas cactus at Michaels the other day, and I already had the white tree.